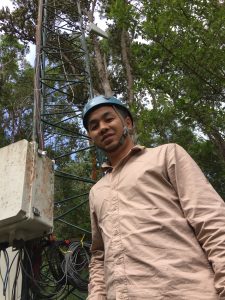 (3) Soil fungal communities were significantly changed by mycorrhizal exclusion and rising temperatures in subtropical montane forests. The risk of soil C and nitrogen (N) loss was significantly increased after mycorrhizal isolation at different elevations, mainly because the relative abundance of saprophytes was significantly increased after mycorrhizal isolation, and its open N utilization strategy aggravated the decomposition of soil organic matter. After transplanting high-altitude soil to low-altitude, soil respiration in the treatment without isolated mycorrhiza increased significantly, even greater than that in the new host soil, which mainly caused by the nutrients competition between the original saprophytes in the high-altitude soil and the newly invaded ectomycorrhizal fungi. The effects of climate change and mycorrhizal fungi on soil N availability play a decisive role in soil C cycle. In the future, due to climate change and upward migration of vegetation at different altitudes and elevations, new mycorrhiza invasion may, at least in the short-term, greatly increase soil C and N loss.

(5) Soil respiration in low altitude are more sensitive to changes in quantity of litter than at high altitudes, because litter removal significantly reduces soil respiration at low altitudes but has no significant effect on high altitudes. Increasing litters results in positive PE at high altitude and negative PE at low altitude. We predicate that a future increase in litterfall of 30% with an increase in atmospheric CO2 concentrations of 150 ppm could release about 0.04 t C ha-1 yr-1 from high-altitude forest soil, but could accumulate about 0.28 t C ha-1 yr-1 in low-altitude soil.

Overall, our results strongly suggest that, within the MAT and MAP range studied here, increasing annual precipitation will depress productivity in tropical montane wet forest ecosystems, making soil respiration in these systems less sensitive to climate warming. In contrast, declines in annual precipitation will increase the productivity of these forests, making soil respiration more sensitive to rising temperatures. With both scenarios, our results highlight that effects on soil respiration may be driven largely by productivity effects on the amount of C sent belowground by trees, rather than impacts on the decomposition rates of SOC. In subtropical forests, the response of soil respiration to climate change is mainly driven by microbial acclimation across the elevation gradient. Therefore, climate warming might not increase the CO2 released by microbial respiration as we expected. The rapid adaptation of microorganisms to climate change can mitigate the impact of climate change on the carbon cycle process of forest ecosystems. We speculate that in the future climate warming, the input of litters increased by the increase of atmospheric CO2 concentration may partially offset the effect of soil C decomposition caused by warming, so climate warming would have little effect on soil carbon storage. Consequently, we suggest that, belowground C cycling processes from tropical forest ecosystem could be used to predict the responses of subtropical forest ecosystems to future climate change.